Now that I’ve had a chance to get to know the people on board, thought you might like to meet them too: 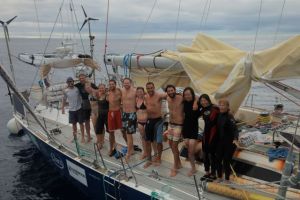 From the left: Clive, Dale, Me, Karen, Rob, Hank, Carolynn, Marcus, Tim, Brandon, Ming, Judy (Jin is behind the camera)

Taken after the epic swim, this photo was quite the comical production involving Jin, still in swim trunks, being strung up the boom, the 7m beam that extends over the side of the boat, which we normally use for trawling. Dangling precariously in a harness with what I can only assume is a very expensive camera, he snapped away as we laughed.

The crew is divided into three watch teams that rotate through the five shifts dividing our days and duties (6-12, 12-6, then 6-10, 10-2 and 2-6 at night). This results in a 3 day repeating rotation of pretty irregular sleep patterns. Having the two 6 hour day shifts off in a row is the closest thing to a weekend – it’s called ‘Sunday’ accordingly.

Grouped with Marcus, Jin and Brandon, I quickly dubbed our team “Man Watch.” Hank stepped up with the tagline “it’s like a cross between Baywatch and a manwich.” Although Marcus recently re-christened our watch ‘the wolf pack’ I still prefer the original.

Marcus is the research director for Algalita and 5 Gyres’ founding member. He seems to be on deck or in the lab area at all hours, always full of energy and ready with stories of dinosaur digs and solo jungle campouts to help pass night watch hours.

Jin is a high up dude with the Seoul Broadcasting Corporation, tasked with filming the voyage as part of a documentary on the Pacific. Although his colleagues were sent on comfy cruises and other cushy assignments, he’s always laughing, in good spirits, and has a seemingly endless stash of candy squirreled away among camera equipment, Korean hot sauce and instant ramen.

Brandon is here as Jin’s assistant and translator. He throws all his energy into the task at hand, whether dishes, sleeping or dreaming of hot tub soaks. Before the trip Brandon had only ever seen Jin in serious suits – certainly never strung up a boom topless.