We’ve finally arrived in the high pressure zone, and seas are calm this morning. Showered, refreshed and full of papaya I’m thinking life if pretty gosh-darn nice at the moment.

We’ve slowed the boat to 2 knots to deploy the first systematic ‘manta trawl,’ a device designed to skim the surface of the sea and sift out bits of plastic and sea life it encounters. Carefully timed and mapped, the resulting samples (we just call ‘trawls’) are collected for various scientific projects of both crewmembers and shore-based affiliates. The first of what is hopefully a minimum of 25 such trawls has come up with a bunch of bits and several fish.

Since yesterday we’ve been deploying the ‘high-speed trawl,’ that, while less representative of sea surfaces, skips along at a quicker clip, picking up fish and plastics for projects where distribution is less crucial. At 2 am last night I helped extract two small silver fish, which we wrapped in foil, located, dated and froze. Today also surfaced a beautiful Christmas ornament-sized glass float encrusted with gooseneck barnacles.

Just before dinner we spot a 6 foot diameter netball – a tangle of colourful, if plastic, derelict nets and ropes, and whatever else they have snared (possible crab trap) in their travels. We rush to slow the boat, taking in the sails, keeping an eye on the netball and manage to swing round and attach it to the boat. Brandon and Jin, our resident Korean film crew, scramble into their dive gear launching selves and cameras into the still churning seas. Swimming to keep up with the boat, they bring back footage of fish sheltering in the ropes and nets. Plastic, waste, and toxic, but also a synthetic shelter, mini-reef ecosystem harbouring life in the middle of the Pacific.

The first few days were quite a trial, getting using to an aquatic life in less than ideal sea conditions. While I will spare you the gritty details, I broke through the worst of it on the second night.

Waking at 2am for watch, I barely struggled into my ‘foulies’ (wet weather gear). I stumbled on deck, the cool air instant relief, and the milky way spilled across the sky. In these wee hours, First Mate Dale teaches me, complete sailing novice, to steer for the first time, using compass and stars to keep the 72 foot boat on course. Tethered to the boat by the 5 foot length of red webbing attached to my life vest- harness, I am jostled by swells I cannot judge in the dark, which send occasional heavy splashes of sea water direct to my face. Flying at 10 knots, with shooting stars above and bioluminescence below, I finally feel I am doing something as part of the crew. The rest of my watch team nods off as I hold the wheel through dawn.

In all of her glory, the Sea Dragon! 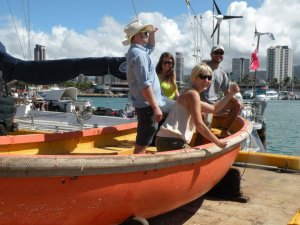 Leaving for the Sea Dragon in a few minutes. Have had trouble looking the ocean straight in the eye the past few days. Thunder rumbles matched nervous tummy grumbles last night, but I’m all packed for the third time and hopefully haven’t forgot anything vital. If you haven’t looked at a map recently, there’s nary and mini-islet for stretching land-legs between Hawaii and Vancouver – we will be sailing across some of the deepest reaches of the Pacific. We’re spending tonight on the boat in the harbour, perhaps to ensure nothing is forgotten, or maybe to weed out anyone with second thoughts before living in close confines for three weeks.

I’ll be almost completely offline, offgrid until at least July 27th  but will keep posting as much as possible. I have limited email access via satellite phone, and have (hopefully) arranged for blog comments to be sent my way if you have thoughts, questions, messages. Pretty photos will be few and far between due to data costs, but I’ll be sharing the highlights on the other side.

Yesterday sister and I bused up to Waimanlo beach for a day of cleanup and a change of pace from buzzing Waikiki. Like most places on Oahu’s windward side, Waimanalo boasts both rugged beauty and a steady accumulation of marine debris, especially plastic from around the pacific rim.

While not covered in piles of waste, the beach was littered with poker-chip sized pieces every few steps, often the blues and greens and oranges of detergent bottles. We found some identifiable chunks – bottle caps, a shoe, plastic bucket handles, and three weathered half toothbrushes that seem proof of distant origin. Unlike cigarette butts (made of millions of plastic fibers, not paper and harbouring toxins that release into water after only an hour), and new-looking food wrappers, these were not items carelessly discarded by beachgoers. The strange blue-grey tubes, on the middle-left, are ‘oyster spacers,’ from farming operations in Asia.

As my sister pointed out, you don’t even see most of the plastic unless you are looking for it. Like the garbage patch, most detritus is broken into pieces, colorful sprinkles of festive, but toxic synthetic sand.  Dragging an increasingly weighty garbage bag on a hot morning across only a tiny fragment of one beach, unable to collect all the little pieces, we began to get a very practical sense the impossibility of clean-up. 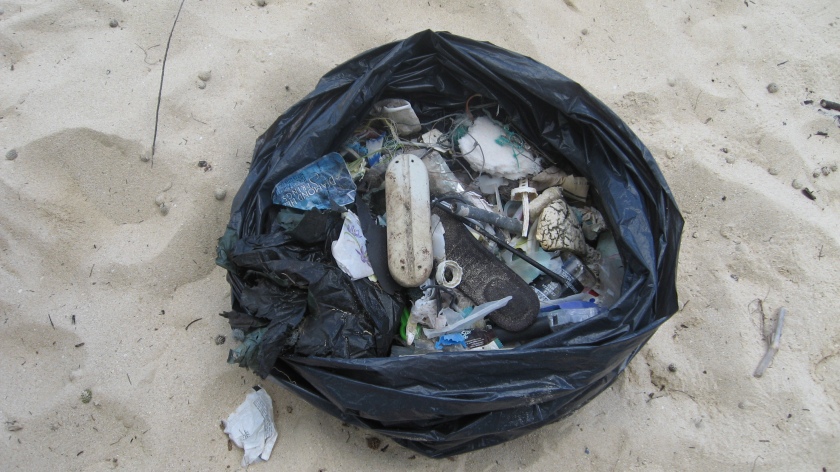 As the bus driver joked when asked about the length 0f the beach – “it goes all the way around.” Multiplying plastic bits  by 112 miles (180km) of coastline on Oahu alone, I can barely begin to imagine the immensity of the problem at sea. I am also struggling to reconcile the treasure-hunt satisfaction of finding large, colourful, or identifiable pieces, with the gravity of plastic waste, a contradiction I can only imagined will be greatly multiplied on the expedition as we hope as ‘explorers’ to find waste, while, whole-heartedly wishing it was not there to be found.

A few days ago, I had a long phone conversation with a founding member of B.E.A.C.H. who pointed me in the right direction for beach clean-up, strongly recommending gloves as protection against the dangerous synthetic chemicals like DDT that adhere to the surface of ocean plastics at many, many times the concentration of surrounding water. She was also adamant that BEACH was not simply a beach cleanup organization. In fact, she had refused to participate in a cleanup of Waikiki beach on grounds of lacking litter prevention measures. In response to my commenting that tourists act as if maid service extends to the beach, she replied with a story of a man finishing a cigarette and dropping it deliberately on the ground in the path of a girl scout collecting litter.

Collecting plastic on the beach does helps ensure it does not break into smaller pieces, wash out to take another 6 year turn around the gyre, or be eaten by marine life. As many have pointed out before me, however, truly cleaning a beach requires stopping the flow of plastics. Yet, despite BEACH’s efforts targeting in sequence, cigarette butts, bags, bottle caps and cutlery, ever more plastic disposables seem to be appearing. Cheap inflatable beach toys, in bright blue, pink and green, are almost as prevalent as tourists in Waikiki. Sold on almost every corner for less than 5 dollars (“air mattress $2.99; $3.59 inflated”), they are designed to last a single, short vacation at most and it is unlikely that even resolute survivors would be packed back home to be used again.

I’ve been in Honolulu the past few days, half holidaying, half-researching. My trip started with strange and serendipitous encounters – an airplane seat neighbour that claimed to be Steven Segal’s body guard buying me 10am champagne, and randomly recognizing fellow expedition mate, Tim Silverwood, in the hostel lounge. 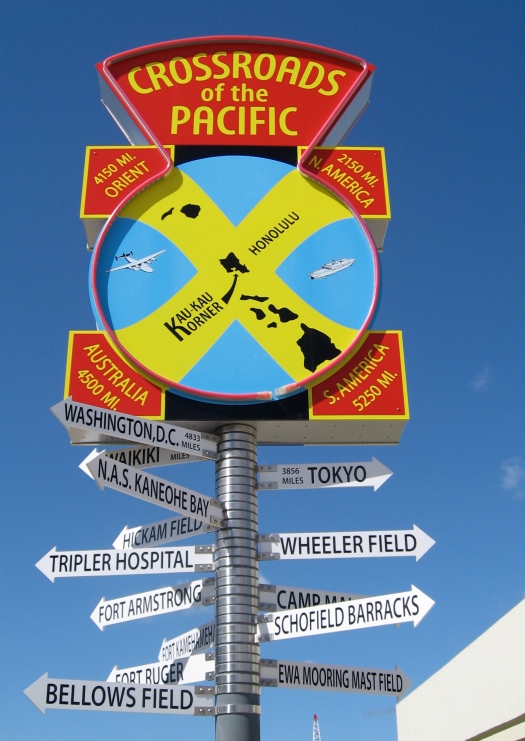 Early Friday morning I took a taxi to Pearl Harbor with a youth hostel friend, securing a coveted ticket to the memorial. I tried to politely offer my version of the ‘factual’ exhibit. The “road to war” display begins with Commodore Perry landing in Japan and thus ending a long period of isolationism – or, white American man magically changes the entire course of history the second his foot lands on foreign soil. I was most enrage-amused by a large map that marked all the sites of “Japanese Expansion” across Asia and the Pacific but neglected to explain exactly what the US was doing in Hawaii (not a State until 1959) and the Philippines. While overall a careful, interactive exhibit that gives much credit to a technologically advanced, meticulously planned, daring attack, and acknowledging the naïve and arrogant mistakes of the US navy at the time, the exhibit designers still manage to label the Japanese as enemies. Perhaps the most striking contrast from the Hiroshima memorial, is the promotion of American patriotism, not peace, as if what is carefully framed as an event in the past still justifies current (and unacknowledged) presence in Japan and the Pacific. With the mandatory movie explicitly instructing the audience to “mourn the dead,” and remember the event as “monumental history,” Pearl Harbor is a memorial to military sacrifice, not a plea for humanity.

Oahu, of course, is more than a crossroads for textbook history. Waikiki’s transient tourist community has an especially prominent Japanese presence. The grocery store carries bento-box lunches and other Japanese style to-go food with multi-language labels, but offers only plastic forks, not chopsticks at the check-out. There’s an Aloha sushi chain, ubiquitous bilingual reminders that tips are not included in restaurant bills and taxi fares, and local guys cat-calling after pretty girls in awkward Japanese, “kawaii desu ne!” (pretty, isn’t it?). The commodified, superficial mix of cultures (as food/shopping/kitsch), is perhaps most obviously materialized as ‘spam musubi’ – Hawaiin pork, American processed into Japanese convenience food:

At the end of the day, Waikiki reminds me as much of Vegas’ tourist infrastructure as of other beach cities. The towing hotels connected by malls, designed for consumption alone make Cuba’s Veradero seem quiet and quaint in comparison. What is otherwise mostly a typical Hawaiin holiday is increasingly punctured by reminders  – as I stare across the sea, hear others speak of flights home or stumble across signs numbering the miles to North America  – that I am about to embark on my own monumental crossing of 2705 (4354 km) to Vancouver.